“Not having proper residency, the threat of deportation – all of that comes together. We have learned that this problem of not having a secure status and the stress connected to it can affect the reproductive system.”

Interview with an activist from Women in Exile 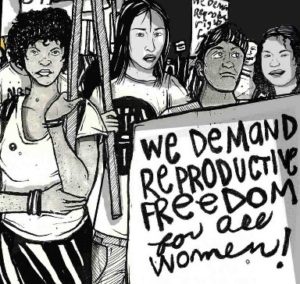 Women in Exile is an initiative of refugee women founded in Brandenburg in 2002 by refugee women to fight for their rights. We decided to organize as a refugee women’s group because we have made the experience that refugee women are doubly discriminated against not only by racist laws and discriminatory refugee laws in general but also as women. The „Asylbewerberleistungsgesetz“ was passed in 1993 to discourage asylum seekers from coming to or staying in Germany. It is racist and discriminating. According to this law only the treatment of acute diseases or pain is covered. Since 2017, we are engaged in a health project and we decided to empower ourselves by learning more about our own bodies. Through discussions and workshop we learn and empower ourselves on health issues which affect us. Many women believe they did not have health problems before, but developed them after arriving in Germany. Some of the women have undergone many minor operations which keep on recurring and might develop into major health problems including traumas and reproductive health issues.

What does Reproductive Justice mean to you?

For me it is about women deciding whether to have children or not to have them. It includes the conditions under which they have to take these decisions and the process of child bearing.

Do you use this term in your political work?

Yes, I do use this term in my activism. It encompasses issues with getting pregnant as well.

Some of the women we are working with experience problems with conceiving, or with their reproductive system. Some of them are being diagnosed with myomas or cysts. Sometimes it is difficult for them to go to see doctors, because for refugee women it is often difficult to access proper medical care. We are using this term to address this type of experiences women are having.

What kind of strategies do you have when women report having problems connected to their reproductive health?

As part of our health project we organize empowerment workshops facilitated by professionals experienced in the health care field, to which we invite women so that they can learn about their bodies and alternative approaches to the diagnosis and treatment of reproductive problems. So far, professionals from FFGZ (Feministiches Frauen Gesundheit Zentrum) and KomMit - BBZ [Beratungs- und Betreuungszentrum für junge Flüchtlinge und MigrantInnen] have facilitated such workshops for us.

Which laws, institutions and everyday practices police and regulate the access of refugee women to reproductive freedom?

The main law that regulates the access of refugee women to healthcare services is the Asylbewerberleistungsgesetz, which only allows refugees to have minimal medical care in emergency situations. If you do not have a legalized refugee status yet you only get a Krankenschein to go to the doctor. You will only get basic treatment with that. Reproductive problems are treated by specialized doctors. If you need to go see a specialist, you need to apply for a permission from the Sozialamt because these services have to be payed for by them. The problem is that the Sozialamt can refuse to allow you to visit a doctor or pursue a certain treatment. They might instead send you to another doctor for another opinion. So they are the ones to decide if you can go to see a specialist and this is why it is difficult for the refugee women to get a specialist.

So the Sozialamt employees who decide about your access to medical services are not even trained medical staff?

Yes! A doctor can say “Okay, you have a problem and you have to go and see a specialist.” and give you a transfer. But in order for you to see this specialist the Sozialamt has to agree to pay for the visit first. And that takes time. If you have a problem, obviously it becomes worse! And day for day you are waiting for some decision, but the people who decide do not even care how you are doing. These are things you should not wait for. If a doctor transfers you to another one you need immediate care.

Beyond working on reproductive health, you are also helping refugee women who need access to the mental healthcare system or the general health care system. In which ways does Women in Exile support these women?

Women approach us with their problems and we connect them to counseling centers, like KommMit in Brandenburg who we work closely with. They offer psychological counseling for refugees, so we send women there who come and tell us they have a lot of stress and trauma. We have come to realize that the trauma might even be coming from their reproductive problems issues and turn into mental health issues later. It is usually a combination of many things: Not having proper residency, the threat of deportation – all of that comes together. We have learned that this problem of not having secure status and the stress connected to it can affect the reproductive system. Most of the women are complaining about problems with their uterus and bleeding all the time. We have some women who sometimes are bleeding for two weeks. And when they go to see a doctor, the doctor usually doesn't´t say much. So we try to send them to these counseling centers to get a second opinion.

You told us previously that pregnant refugee women might be accused of conceiving a child for papers. How do you or the women you are working with deal with getting accused of becoming pregnant just to receive a residency permit?

They would not say that out loud, but this one of the racist remarks you get when you are pregnant. Because the Sozialamt or Ausländerbehörde know that it is easier to get the permission to stay if you have a baby with somebody who has a German passport. Their racist thinking is “Okay, if someone is having a child it is because they want to stay.” And then of course they will not make it easy for them. Some of them are even sent to do a DNA test to prove that the father is actually the father. When women have to decide whether they want a child or not that is nobody else´s business. You have your child because you want it, not for papers, despite people thinking so. These are just accusations from the authorities because they do not want people to stay.

You mentioned that some women were told that they have a cyst and have to undergo surgery to take it out. How do you deal with that - when a woman comes to you and is telling you that the doctors said that her cyst should be surgically extracted? How do you react? How can you support that woman?

Some of the women are being told to undergo this kind of operation for the second or third time. And they ask: Why should we go to through operations all the time when we are not getting healed? What we do is try to get them an appointment at a doctor where we think they will get proper examinations. The organizations we cooperate with are in touch with doctors who can provide a second opinion. Most women who got a second opinion did not choose to undergo another operation, but when they return to their regular doctors for check ups or are not feeling well, they keep on being told that they should get another operation.

What are your strategies to denounce the misbehavior of doctors?

It is very difficult to tell a doctor that he did something wrong because, you know, the doctors are the ones who make the check ups, they have a lot of power over you. We encourage women in these type of cases to get a second opinion and leave it to individuals to decide on what they want with their bodies.

Our strategies in our health project include bringing things out into the open and showing that some doctors are simply not examining refugee women properly. We show that this is connected to the type of medical insurance they have, because on a Krankenschein you will only receive basic aid. When the Sozialamt will give permission for someone to be treated, maybe for the next three months, the doctor might find it easier to operate them and have them keep on coming back.

So what we can do is create awareness and most importantly let women know about their rights, because some of them even had to go through these operations without any explanations, without any translators. So they do not even know really what they are going through. Right now we are in the process of working with some other groups on a tribunal about health next year, and I think this will also create awareness about how the medical system in Germany treats refugees.

Which groups are you cooperating with? Who are your allies?

In the medical field as we already mentioned we have cooperations with Feministisches Frauen Gesundheits Zentrum (FFGZ) and with KommMit. We also contact Medibüro when we have cases of women who need medical care and are not able to access permission to legally see a doctor. That means people who are providing these kinds of services are our allies.

Are you in touch with BPOC doctors or psycologists?

Not really, because we depend on organizations who are in touch with doctors. Some of them could be BPOC… But here at InVision festival I met Felicia Lazaridou, Doctoral Candidate in the Transcultural Psychiatry Research Training Group of Charitè University of Medicine in Berlin, who was giving a mental health workshop, and we said we will keep in touch.

If you want to know more you should watch “Testimonials From the Uterus”, a movie that we created as part of our health project. It will make you understand more of what refugee women are going through.

We also take testimonies of women about their medical situation and what they are going through and include them in our newsletter.

This interview has been planned, carried out and transcribed by a group of four people, out of whom two identify as women of Color, one as a Muslim woman of Color and one as a Black woman.

How can you follow and support the work of Women in Exile?

Newsletter with information on reproductive justice and testimonies of refugee women